What kind of seafood is walnut shrimp? 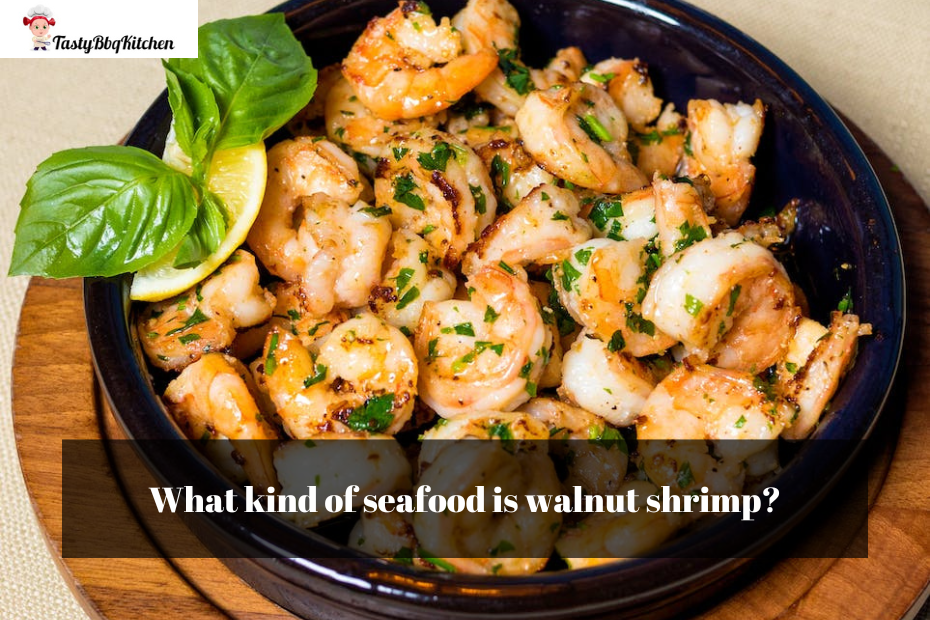 Walnut shrimp is a popular dish found in Chinese and American Chinese cuisine. It is made of deep-fried shrimp that are coated in a creamy, sweet sauce and served with a sprinkle of toasted, chopped walnuts on top.

The ingredients used to make walnut shrimp vary, but typically include:

Shrimp: Fresh or frozen shrimp are used for this dish. They are usually peeled, deveined, and butterflied before being deep-fried.

Batter: A light, tempura-like batter is used to coat the shrimp before frying. This batter is made from a combination of flour, cornstarch, baking powder, salt, and water.

Sauce: The sauce used in walnut shrimp is typically a creamy, sweet, and slightly tangy sauce made from mayonnaise, honey, and rice vinegar. Some recipes also include a small amount of ketchup or tomato sauce for added flavor and color.

Walnuts: Toasted, chopped walnuts are used as a garnish on top of the finished dish.

How To Prepare This Dish?

To prepare the dish, the shrimp are first coated in the batter and deep-fried until they are golden brown and crispy. The sauce is then prepared by mixing together the mayonnaise, honey, and rice vinegar (and any other ingredients as desired). The fried shrimp are then tossed in the sauce and garnished with the toasted, chopped walnuts.

There are many variations of walnut shrimp, and some recipes may include additional ingredients or use different methods of preparation. For example, some recipes call for the shrimp to be dipped in an egg wash before being dipped in the batter. In other recipes, the sauce may have more seasonings or spices.

One popular variation of the dish is called “candied walnut shrimp,” which includes an additional step of coating the shrimp in a mixture of sugar, cornstarch, and water before deep-frying them. This creates a crispy, caramelized coating on the shrimp that adds a unique sweetness to the dish.

Overall, walnut shrimp is a delicious and indulgent dish that is perfect for those who love the combination of sweet and savory flavors. Whether you’re looking for a fancy appetizer to serve at a dinner party or a quick and easy meal to make at home, this tasty dish is sure to be a hit.

What is honey walnut shrimp made of?

Honey walnut shrimp is a dish that originated in China and has become popular in American Chinese cuisine. It is a sweet and savory dish that consists of battered and deep-fried shrimp coated in a creamy sauce made with honey and candied walnuts.

The main ingredients in honey walnut shrimp are, of course, shrimp and walnuts. The shrimp is typically large and is peeled and deveined before being coated in batter and deep-fried. The batter is usually made with flour, cornstarch, egg whites, and water and is used to give the shrimp a crispy and golden-brown exterior.

The candied walnuts are made by boiling shelled and halved walnuts in a mixture of sugar, honey, and water until the mixture thickens and coats the nuts. The walnuts are then drained and allowed to dry before being tossed in the sauce.

The sauce for honey walnut shrimp is a combination of honey, mayonnaise, and heavy cream. The honey adds a sweet and slightly tangy flavor to the sauce, while the mayonnaise and heavy cream provide a creamy and rich consistency. Some variations of the sauce may also include a small amount of white wine or rice vinegar for added tanginess.

Honey walnut shrimp is typically served over a bed of white rice, although it can also be served with noodles or on its own as an appetizer. It’s a popular dish at Chinese restaurants, and buffets often have it.

Honey walnut shrimp is a delicious and indulgent dish that is perfect for those who love sweet and savory flavors. Its combination of crispy, deep-fried shrimp, creamy sauce, and candied walnuts makes it a unique and satisfying meal that is sure to please a wide range of palates. Whether you’re a fan of Chinese cuisine or just looking for something new and delicious to try, honey walnut shrimp is a must-try dish that is sure to become a favorite.

How do I cook Costco honey walnut shrimp?

Costco honey walnut shrimp is a popular dish that combines crispy, deep-fried shrimp with a sweet and creamy sauce made with honey and chopped walnuts. It’s a delicious and easy-to-make meal that is perfect for a quick dinner or a special occasion. If you’re a fan of honey walnut shrimp and want to learn how to make it at home, then this article is for you!

Now that you have everything you need, it’s time to start cooking! Here’s how to make the dish:

In a shallow dish, mix together the cornstarch, eggs, and panko bread crumbs. Dip each shrimp into the mixture, making sure that it is fully coated on all sides.

While the shrimp are cooking, make the sauce. In a medium saucepan, whisk together the mayonnaise, honey, heavy cream, and vinegar until smooth. Add the chopped walnuts and diced pineapple, and stir to combine. Bring the sauce to a simmer over medium heat and cook for 2–3 minutes, or until it is heated through and the walnuts are lightly toasted.

Once the shrimp are cooked and the sauce is hot, it’s time to assemble the dish. Place the shrimp on a serving plate and drizzle the sauce over the top. Garnish with additional chopped walnuts and diced pineapple, if desired.

And that’s it! Your Costco honey walnut shrimp is now ready to serve. This recipe makes enough for 4-6 servings, depending on how many shrimp you’d like to include in each serving.

If you’d like to add some extra flavor to the dish, you can try experimenting with different types of honey or adding some diced red bell pepper or scallions to the sauce. You can also serve the shrimp with a side of steamed white rice or broccoli for a complete meal.

Overall, Costco’s honey walnut shrimp is a tasty and easy-to-make dish that is sure to become a favorite in your home. Whether you’re looking for a quick dinner or a special occasion meal, this recipe is sure to please.

Honey walnut shrimp is a dish that has become popular in Chinese-American cuisine and is often found on the menus of Chinese restaurants in the United States. It consists of deep-fried shrimp coated in a creamy sauce made from mayonnaise, honey, and chopped walnuts. While the dish may seem to be a traditional Chinese recipe, the origins of honey walnut shrimp are actually somewhat disputed.

One theory is that the dish was invented in the United States by Chinese immigrants who were looking to create a new, more appealing menu item for American diners. These immigrants were likely influenced by the ingredients and cooking techniques of their new home, as well as their own culinary traditions. Honey walnut shrimp might have been made to use traditional Chinese ingredients and cooking methods in a way that American people would like.

Another theory is that honey walnut shrimp is actually based on a traditional Chinese recipe that has been modified and adapted for the American market. It is possible that the dish was created by Chinese chefs in the United States who were trying to recreate a Chinese dish using ingredients that were more readily available in their new home. In this case, the dish would have evolved over time as it was passed down from generation to generation of Chinese chefs in the United States.

Despite the debate over its origins, it is clear that honey walnut shrimp has become a staple of Chinese-American cuisine in the United States. It is often served as an appetizer or a main course and is typically accompanied by white rice or noodles. The dish has also gained popularity beyond the United States and can now be found on the menus of Chinese restaurants around the world.

One of the reasons that honey walnut shrimp has become so popular is its delicious flavor. The combination of sweet honey, crunchy walnuts, and creamy mayonnaise create a unique and satisfying taste that is hard to resist. The dish is also visually appealing, with the bright white sauce and golden-brown shrimp making for a visually striking presentation.

While honey walnut shrimp may not be a traditional Chinese dish in the strictest sense, it has become an integral part of Chinese-American cuisine. It is a dish that has evolved over time, drawing on both Chinese and American culinary traditions to create something truly unique and delicious. Honey walnut shrimp is a well-liked and popular dish that is likely to stay that way for a long time. It may be based on a traditional Chinese recipe that has been changed for the American market or it may be a completely new dish.